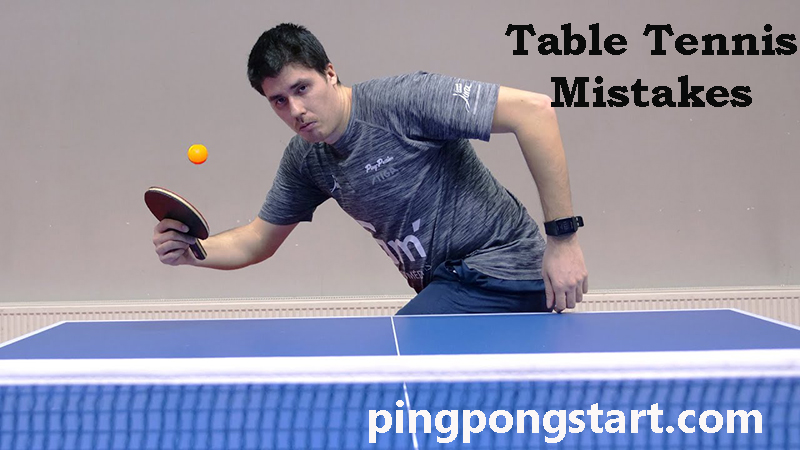 Those who are novices of table tennis often suffer many difficulties and mistakes while playing this sport. If you want to improve quickly, you should try not to make these rookie mistakes anymore

Some often play table tennis at home so they do not care about the rules. However, when you are in real games, you have to know them. If table tennis is already a part of your life, you should enroll in certain clubs to exchange experience with like-minded people. At that time, getting the rules clearly, in the beginning, will make everything much easier for you.

Table tennis is an easy sport yet hardly many players can keep the fire burning and stick with it. It requires players to have concentration, skills, and passion. Even so, that doesn’t mean you can become proficient as experts after only 1 or 2 years of practice.

8. Use Excessive force when delivering the ball

The next mistake is hitting the ball too hard, resulting in it never making it to the other side of the table. When you are new, you may find it a challenge to control your speed and strength. That’s why you should just strike gently and get your ball to go in the right direction. At the starting point, your job is to do things properly, not try to give your opponents a hard time. Only by doing so, you can improve your skills quickly and get the right techniques.

7. Too lazy for footwork

Planting your foot in one single spot will prevent you from blocking any strike that is out of reach. Therefore, you should learn to move around in front of the table to be able to handle the tough strokes. However, that doesn’t mean you have to move far from where you are supposed to be as it will give your opponents chances to beat you.

table tennis is a decent means of relaxation and stress relief that said, if you do not care about the technique and just do what you feel like doing, you are very likely to be affected later on. This is because keeping following the improper techniques will eventually result in a bad habit that is hard to break. In case you want to be a professional player, it will be difficult to correct.

5. Have Your Own Style

You know, table tennis is a very popular sport and is played by a lot of people. So when you start playing, you probably get a lot of advice from other players. However, not everything you hear will be a good fit, and it is your job to figure out which style gets to enter your table tennis toolkit. Don’t be swayed by the others’ opinions.

4. Buying a variety of rackets

In the beginning, you should only find yourself a racket from the standard category, avoid jumping between several types for several levels of experience. By doing so, you will fail to build a consistent technique. Rather, you should stick to playing with the right style at first, and only pick up the racket for expert players once you have become proficient.

For many novices, having a racket that does not feel right while they hold it might convince them to change to another once, and as a result, they keep on switching from one to another. This is not good for them as they will not be able to grasp the feeling of gripping the racket and delivering a ball. This can end with a scenario in which they take forever to familiarize themselves with racket holding, and a just as long amount of time to get the ball flying.

The improper grip is one of the most common mistakes of those who haven’t got the hang of table tennis yet. This mistake causes them difficulty in making improvements. Therefore, when you are new to fame, the first thing to do is to get a racket that you can hold the right way.

1. Try to smash instead of brushing

When you first start playing table tennis, you often try to smash instead of brushing the ball. This is because you are overwhelmed with stress, and at the same time, the fear of an incorrect strike. Nevertheless, in fact, the best way to hit the ball properly is to relax and keep your mind at ease while playing. This will help you relieve stress very well.

Above are some mistakes that players often have when playing table tennis. This article aims to help you avoid mistakes during practice and make some significant improvements.