Wang Liqin holds three majors (3 World Championships). He has been ranked #1 by ITTF for 25 consecutive months, from September 2000 to September 2002, which is the second-longest period for being consecutive #1 of the world as of January 2011. At the end of 2013, Wang Liqin retired from the national team

Wang is the type who changes his playing equipment often. He has perhaps used more than 10 different models of rackets, some of them for a longer period of time, e.g. The Butterfly Timo Boll Spirit, Stiga Clipper CR, Offensive CR, Rosewood V, DHS Hurricane King II, III, and some of Nittaku’s models. His main forehand rubber is DHS Hurricane II, III, TG III. It is said that he had used Nittaku Hammond, the Tenergy series, and many other rubbers for his backhand.

Wang Liqin uses the shakehand grip. He plays a forehand dominated style with the occasional backhand loop to open a topspin rally. His above average height allows him additional leverage for acceleration and momentum, creating more powerful shots. Many often describe him as possessing one of the most unusual and powerful forehand shots.

Wang Liqin is the type who changes his playing equipment often. He has perhaps used more than 10 different model of rackets, some of them for a longer period of time. E.g: 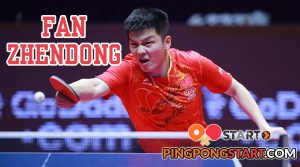 We are in associate programs from Amazon and may earn advertising fees when you use our links to these websites. These fees will not increase your purchase price, which will be the same as any direct visitor to Amazon.com.