Li Xiaoxia is a Chinese table tennis Grand Slam champion. As of April 2011, she occupies the top place on the ITTF women’s world ranking. 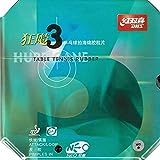