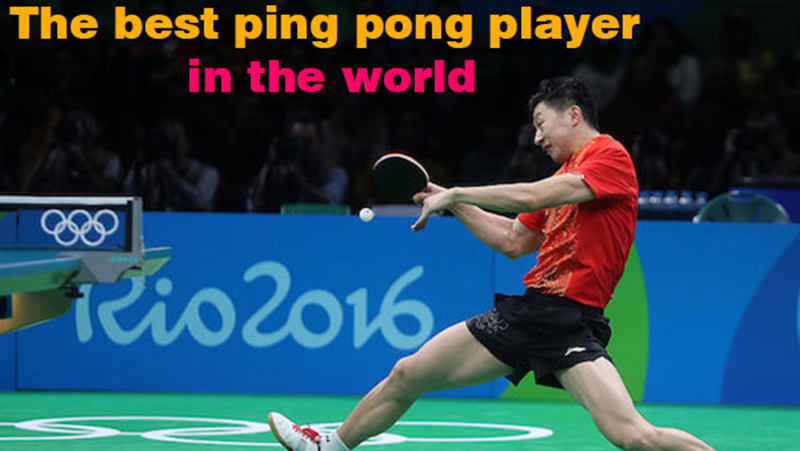 In this article, the greatest table tennis players of all time have up to 8 Chinese players. Also understandable because table tennis is the most popular sport in China.

Of the 11 players, Ma Long, Jan-Ove Waldner, Liu Guoliang, Kong Linghui, and Zhang Jike are five who have completed all the Grand Slams in their career. So we rank the highest

Born on October 20 in 1988, Ma Long is one of the five players to complete a career ‘Grand Slam’. His first championship in 2006 inspired him to become one of the most famous players in the history of table tennis. Arguably the best forehand attacker in table tennis history, Ma uses a close-range third-ball play to maneuver his opponents in most matches. At the dawn of his career, his approach was mostly forehand-oriented, dominating playstyle with sturdy forehand loops, with him using his backhand only for controlled returns to set up the forehand.

Jan-Ove Waldner is one of the best table tennis players of all time, not only did he make a name for himself but also the name of table tennis around the world. He was born on October 3, 1965, in Stockholm, Sweden. At a very young age, he was potentially fit for playing sports. In 1982, he became one of the finalists in the European League, and his opponent was his team member, a left-handed player, ‘Mikael Appelgren’. After this fateful night, his career in table tennis began.

He played table tennis ever since the 1990s to his last match on February 11th, 2016 while playing in the Swedish first league for Ängby/Spårvägen and officially announced his retirement as a player.

What makes Jan so great at table tennis is his ability to serve properly. At the age of seven, he could quickly return 75 backhands without any mistakes. At nine, he possessed a good forehand loop. In a match, he could easily trick his opponents with many serves at different angles, types, or even force. Most pros said that he and the ball has a strong connection that no one else has. He can find the perfect shot, an ideal angle, the thousandth of a second when the ball hit the paddle, only in the next millisecond to leave the rubber with the speed of a catapult, heading towards his opponents’ side. His serves are the reasons why he is called a legend in table tennis.

Liu Guoliang is considered one of the greatest ping pong players of all time, the second man ever to achieve a grand slam of 3 major tournaments. He was born on January 10, 1976, in Xinxiang, Henan. He was very good at playing table tennis when he was a child. In 1991, Liu was first chosen for the Chinese national team, which led him to the professional table tennis. At that time, he was just 15. From 1991 to 2001, Liu was seen as one of the best table tennis players as he won many medals in this sport. However, he retired as a player after the 2001 season. Soon after his retirement, he became the youngest head coach of the Chinese men team when being appointed as the head coach of China National Men’s Team at the age of 27.

His special playing style is based on the use of short pimped-out rubber. Liu favors a penholder grip and is the forerunner of the backhand reverse topspin. His blade is Stiga Clipper, his forehand rubber is Stiga Clippa, and his reverse backhand rubber is Stiga Mendo Energy. During his time, he won over four medals in the Olympic, 2 of which are golds. Another gold and bronze in the World Cup, Liu has made himself the most decorated male table tennis in history.

Timo Boll is a German player born on March 8 in 1981, who is currently playing for Borussia Düsseldorf. He is a left-handed player whose best weapon is his forehand topspin drive but is also noted for his rapid backhand loop. Boll’s technique was ahead of its time as he was one of the first two-winged loopers. He creates the spin-block instead of a passive block to put more pressure on his opponents.

He is seen as a hard-working and enthusiastic player who always spends time practicing and improving his skills. As a result, he won many medals in a variety of international competitions such as the World Cup, European Champion, and World Championship Single. With such achievements, Timo Boll is known for being one of the top players when it comes to generating elevate amounts of spin, especially in his opening topspin.

Xu Xin, born January 8, 1990, is a professional player from China. In 2013, he first reached the No. 1 position in the World Ranking after becoming the winner in the ITTF World Tour Grand Finals in December 2012. Since then, he has achieved many medals in many international competitions, making himself one of the best ping pong players of all time.

Xu Xin is a penhold grip player, following the footsteps of former champions such as Wang Hao and Ma Lin. His long arms and frame enable him to move quickly and reach his ball widely. His arms give him the ability to execute a graceful, unique forehand loop. He has also adopted the reverse penhold backhand grip (RPB), a recent development for China’s penholders, allowing a two-winged attack. He still uses a traditional penhold (Chinese) backhand to lob and push the ball with the forehand side of his racket.

Wang Liqin was born in Shanghai, June 18, 1978. He is considered one of the greatest ping pong players in the world. He started his career in the 90s. During his time, he won 3 majors and ranked #1 by ITTF for 25 consecutive months., from September 2000 to September 2002. However, Liquin retired from 2013 from professional table tennis in 2013.

What makes him so special is not just his playstyle but how frequently he changed his paddles. He had used more than 10 different models of rackets, some of them for a long period of time.

That is the list of the greatest table tennis players in the world until 2020. They are considered Roger Federer, Rafael Nadal, Novak Djokovic .. in table tennis.

And you, who is your table tennis idol !!