Some Ping Pong Rules Doubles That Amateur Should Know

Do you know what the Ping Pong rules doubles are? Some players think that both singles and doubles rules are exactly the same, but they might get wrong. Not many people know that the rules in the doubles game show a little difference in gameplay and tactics. 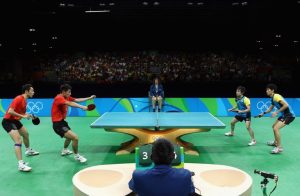 If you are a newbie and genuinely interested in these things, we are willing to help you understand in every detail through a list of in-depth rules. Are you ready to be fully informed?

In a table tennis match, every equipment must meet the standard of measurements and types, established by the International Table Tennis Federation (ITTF). Of course, the table is not an exception.

Regarding this sport, its table should be a rectangle with 9 feet in length and 5 feet in width. Notably, it needs to be secured in a horizontal plane 2.5 feet above from the floor.

What is more, the material to make a Ping Pong table has to return the ball bounce of about 9.1 inches when dropping a tennis ball from the height of 11.8 inches onto the table surface. Also, the table surface must be designed with a uniform dark matte color.

Another detail about the surface is the 2 centimeters thick white line in the table border as well as a straight line to divide this table into two equal courts.

Primarily, for the doubles game, each court will be divided into halves by the 3 millimeters thick white line, which is running parallelly with the sidelines.

A table tennis ball seems to be simple, but to be used in an official competition, it has to meet some standards set by official organizations. For starters, this ball must be made of celluloid plastic and have orange or white colors. This color is outstanding enough to make the ball visible during the gameplay.

Also, it should have a mass of 2.7 grams and a diameter of 1.57 inches. Typically, the approved ball will have the text “ITTF” printed on it, this indicates that the ITTF (International Table Tennis Federation) has allowed the ball to be employed in all tournaments.

The table tennis paddle also follows the ITTF standards. To be more specific, its wooden part, considered the blade, must have at least 85% thickness from natural wood, such as balsa, cypress, or limba woods.

The racket blade’s average size has a length of 6.7 inches and a width of 5.9 inches. Players are allowed to customize the paddle surfaces depending on the blade’s size and their play style.

However, according to ITTF, the surface on each side must be different from each other. That’s why a paddle comes with two colors, black and red, to distinguish both of them.

Wearing suitable table tennis clothing that complies with the dress codes in a formal competition is another crucial factor players have to be well informed of.

They need to wear regular clothing, including short-sleeved jerseys, skirts or shorts, socks, and sneakers. Half-sets or full-length sportswear cannot be worn without the permission of the referee.

In some professional competitions, such as the World, Olympics, or International Open Championships, players’ uniforms must get the approval of these associations first.

Players in the same team or association should wear the same clothing, except for the sneakers. Besides, their opponents must put on some sportswear having different colors to avoid confusion.

Notably, both jerseys and shorts or skirts must have significantly different colors with the table tennis ball. If there are any decorations on the sportswear or any jewelry the player wears, they should be inconspicuous so as not to affect the opponent’s vision.

On top of that, the jerseys have some particular rules. For example, the back of the short-sleeved jerseys can be designed with some typefaces to show the players’ names, clubs they represent, or their association.

In the middle of the back, there should be some clothes the organizer has provided to show the players’ identities. Primarily, this number must be rectangular and not larger than 600 square centimeters.

Any design or typeface on the clothing disparaging the reputation of the sport is not allowed. The referee will decide on whether the clothing is legal or not.

The coin toss will decide on which team either has the right to serve or receive first or choose the preferred side of the court.
So, suppose that team A is the winner of the coin flip and chooses to designate the first service, team B shall choose the playing surface’s side they prefer.

#2. Strike The Ball Into The Right Place

In the singles game, the ball can be struck into anywhere in the opponent’s playing surface during service.
On the contrary, when it comes to the Ping Pong rules for doubles matches, you must hit the ball diagonally so that it enters the right half court of both the server and receiver successively. Of course, the right side in this case is based on your perspective.

In the doubles match, the order of play is more complicated than in the singles one.

To be more specific, there is a match between A and B versus C and D. At first, A serves to C, then C returns the ball to the opponent’s court. At this time, B must play the next shot, and D will receive and return the ball afterward. This certain order of play will go on until a point is scored.

However, this sequence is relaxed in the doubles game having disabled participants. It means that anyone in the receiving team is able to return the ball.

After every two points, the service will alternate between teams and even the players coming from the same team.

Let’s take an example! When your team has completed your two serves, the role in a team will change. The player in the other team, who you were last serving to, will do the next service, and your partner will become the new receiver instead.

In a game between A and B versus C and D, the right sequence should be:

This pattern will repeat until one team wins the point. And at the reminder of the game, C must serve to A, then A serves to D, and so on.

In case one team has won five points, there will be a changeover, which changes the receiving order as well as the court.

Let’s imagine that the first team, consisting of players A and B, scores five points, whereas B is serving to D, who belongs to the opponent’s team. As a result, B will serve to C after a changeover. Moreover, two teams also switch court after that.

A game of table tennis is always played up to 11 points only. So, if a player or a team scores that 11 points first, they will win the doubles game. On the other side, when the score all reaches 10 points, the first player or team establishing a two-point lead subsequently will be the winner.

There are some ways to score points in the table tennis competition according to the ITTF standards.

For instance, A and B are playing the doubles game with C and D. At first, A serves, then C returns, then B returns, and D does the last return. If B accidentally returns the ball instead of A, the point will go to the team of C and D.

To avoid being warned or losing points from the umpire, let’s pay attention to these common mistakes below.

Table tennis is quite an exciting game that everyone can make fun of. However, the game comes with some rules amended by ITTF to be fairer, especially for some formal competitions. But you can rest assured that these rules are easy to grasp and follow.

We do hope that our article of the Ping Pong rules doubles above can be of great assistance for you. Always adhere to the rules, and no doubt you will become an experienced player soon.