How to hold a ping pong paddle in the right way?

In this post, I will show you some guidance on how to hold a ping pong paddle properly. This technique is considered a beginner lesson

First thing first, when introduced to table tennis, perhaps most of us will use a universal grip which is known as the ‘shakehand’. The following steps are designated for forehand players; backhand ones must invert the side in order to perform this technique properly.

Hold the racket loosely, make sure that the web is between your thumb and your index finger and touch the blade’s curve. Take a look at the picture below to understand how to do a shakehand grip. 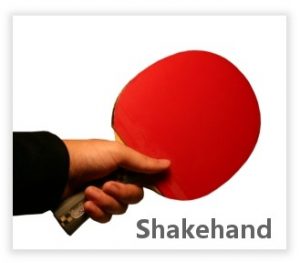 While holding the paddle, ensure that your index finger should rest along the edge of the backhand side and your thumb is laid against the bottom edge of the forehand side. Keep your wrist straight with your forearm; always remember not to adjust the angle too much. 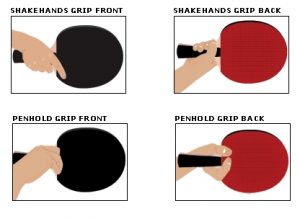 There are a lot of differences between shakehand and penhold grip.

On the surface level, shakehand grip is an excellent ‘all-rounder’ and straightforward method. It does not specify advantage over speed, accuracy or control, but equally response to those three areas. This method is considered a relatively simple way for beginners and intermediate players to take up.

What I have been writing above is just a surface understanding of the shakehand grip, now I will introduce you the in-depth guide on how to master this style.

There are two primary styles of shakehand grip: Shallow and Deep.

Deep shakehand grip focuses on a more relaxable thumb position, which will make your strike more powerful but in turn, lose some accuracy. Your thumb should relax against the rubber, pointing upwards to around 10 o’clock. This method is used when a player has an explosive backhand stroke, thus enabling you to put more power and spin into your returns. 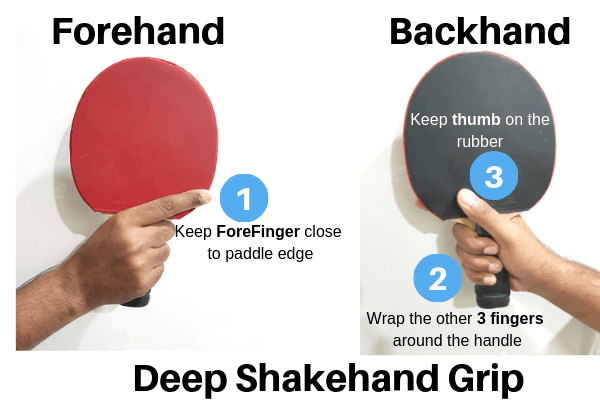 This is a more natural starting point for most players. In order to hold a table tennis paddle following this style, you should place your thumb just underneath the rubber part, opposite to your index finger. This method provides a more balanced experience and flexible footwork. Forehand and Backhand stroke is equally supported by this grip. 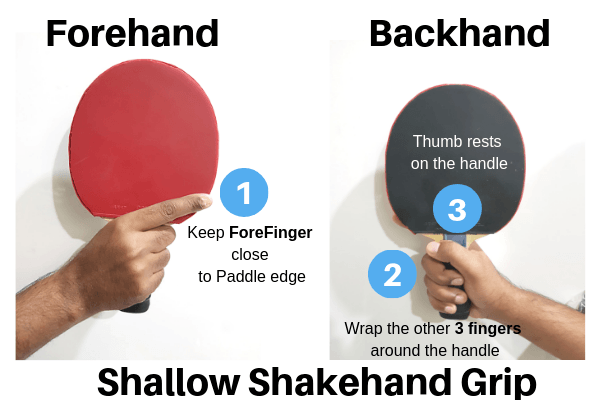 There are many professional players using Shakehand grip frequently in their career such as Ma Long, Fan Zhendong, Vladimir Samsonov and Timo Boll.

Another playing technique that would be a good fit for the new players who are interested in table tennis would be the conventional Chinese penhold grip. It consists of the index finger and the thumb holding on to the table tennis racket handle when the other three fingers are curled around the backside of the racket. The main idea behind this efficient grip is to simply ensure that the player is comfortable while handling the ping pong paddle.

Penhold grip gives the player an advantage on the forehand, thus enabling you to serve more effectively. However, this type has an inherent weakness on the backhand, requiring the player a certain skilled set of footwork. 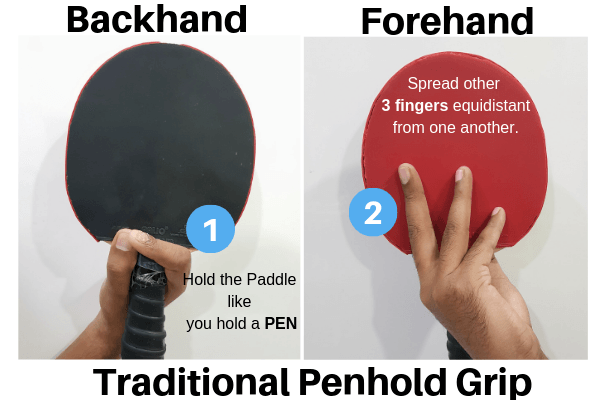 This grip is named penhold is because it resembles holding an actual pen and is a reasonably common grip. This method is previously the preferred and dominant technique in Asia. Besides, it is considered an elegant but powerfully effective way of controlling the ball. The exact style may vary from player to player due to the different hand positions and the advantages they hold, altogether utilize from holding your paddle as if you were holding a pen. Therefore, the most short-handed paddle is used for a penhold grip.

There are some variations put into this style, such as:

In conclusion, there are many ways to hold a ping pong paddle properly. The more proper you hold, the more chance you will outplay your opponents. The aforementioned guidelines are a summary of all playstyles, as well as pros and cons and differences. I hope that from this post you will find a perfect method to practice and take your skills to the next level.