The 2 Best Ping Pong Players in The World

Ping pong is a fun sport which mainly trains people about their flexibility, there are many techniques in playing ping pong and if the players can use them skillfully, they can reach to the top of the game. China has so many masters in ping pong, one of them is the champion of the Seamaster 2018 tournament. Then finally who is the best ping pong player in the world until this moment?

The full name of this tournament is ITTF World Tour Plantinum Kaisa China Open 2018, in which best ping pong players in the world take part in, including Ma Long and Fan Zhendong, whose are considered as the most powerful table tennis players in the world at that time. These guys also get in the final battle and Ma Long beat Fan Zhendong with the final score was 4-1. He became the champion of the tournament and be the best ping pong player in the world. Ma Long is a chinese ping pong player, he was born in October 20th, 1988. Among the top table tennis players in the world, he is at the highest rank. Ma Long style is attacking at both wings. Long is one of the most active table tennis players. The two-sided wing attack technique allows him to hit the ball at an angle and speed that was not previously known. Ma Long is currently representing Ningbo, one of the largest Chinese table tennis teams in the China Super League. Ma Long changed the paddle’s  face to a forehand, but now he is using DHS Neo Hurricane III on the right hand side. The back of the chain is Tenergy version 05. Ma uses DHS Hurricane Long 3. Talking about Ma Long, he is likened to a beast of table tennis. With a powerful jerk along with excellent footwork, it has made him an idol of the modern day table tennis player. And perhaps when looking at the matches of Ma Long, people associated with Wang Hao, always overwhelmed opponents and barely give opponents any chance. Ratios like 4-0 and 4-1 are probably too familiar with Ma Long.

At the age of 16, Ma Long’s level was at par with V. Samsonov – still in top form but failed to score 3-4. At age 18, he won W. Schlager – the legend of Austria at that time. In 2009, he failed in the semi-finals of WorldCup and WTTC by V. Samsonov and Wang Hao. One year later, he lost to Wang Liqin at Quatar open – where many of the top players in the world gathered. But before that, he had won legendary and other table tennis players, even legends such as Ma Lin, Ryu Sung Min, Chen Qi and Xu Xin.

At this point, it is obvious who will recognize, the overwhelming victory of the Ma Long often comes from the match with the players only good at one side, due to the ability to dodge and jerk with the ability to block and push. Ma Long often put opponents into very difficult situations. The defeats and struggles usually come from matches with opponents who good at both sides, which are typically Wang Liqin, V. Samsonov, Wang Hao, Timo Boll or even the youngest player. as D. Otvcharov. In conclusion, back in 2010, Ma Long was a one-side player who played in physical strength and speed but lacked the tactics and calm. It should be easy to see he was defeated by 2-side player, Wang Hao.

And it is likely that both Ma Long and Liu Qin will know that and they understand that if they do not overcome – Ma Long will be expected to become a failure of Chinese table tennis. At the end of 2010 and early 2011, Ma Long’s left-back was the most obvious improvement, especially the German Open in 2010, when he won over Otvcharov, Chen Qi in the ring, and Wang Hao in Final match. Following successive victories in 2011, Austria Open before Zhang Jike in the final, Hungary Open before Joo Se Hyuk in the finals, even he did not lose a set at WTTTC Dormunt, contributed greatly to help. Chinese table tennis team won the championship in that most prestigious team.

And now, not only persistence, Ma Long also learn the technique of ChopBlock. If you notice, you will find that Ma Long can do very well both Ma Lin’s Chopblock and Kenta Matsudaira depending on the circumstances that his judgment, analysis and sensitivity to offer to hand carry. And WorldCup 2012 – 1 of 3 GrandSlam – is the first major achievement he achieved. He displayed very well on the offensive side against Xu Xin, and left with a great strike against Timo Boll. This is also a successful tournament when he lost only one match to Chuan Chih-yuan in the group stage, remaining from then to the championship, he did not lose any more sets, even semi-finals and The finals with two strong opponents are Xu Xin and Timo Boll. 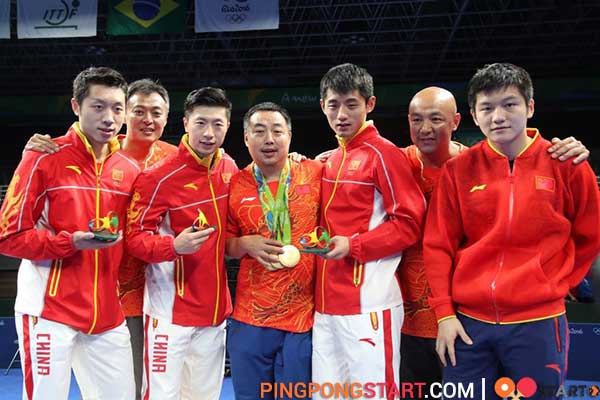 It can be said that until this moment, Ma Long is considered the greatest table tennis player in the world, everything he contributed to the Chinese ping pong group is too much. He never stop training himself and always be at the best in his manners to keep China always be the land of Ping pong Champions.